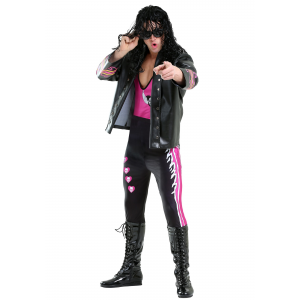 The sunglasses. The greasy hair. The audacity to wear pink. Some of the best ring work to be found. You know who we're talking about. We're talking about The Hitman. Bret "The Hitman" Hart is pretty much the epitome of cool, at least when it comes to the WWE, and in most people's eyes, he's one of the all time greats of the ring too. So the fact that you're eyeing this Bret Hart costume is no surprise to us. That's actually why we made it! Made and designed in our costume studios, we've teamed up with the WWE to bring you this exclusive costume style. With a costume design that perfectly captures his iconic ring style of the 80s and 90s, you'll be ready to hit the ring with this costume set. A tank top and pants combo, complete with signature printing, is designed to look just like his wrestling singlet and tights, and you know we wouldn't want you to make your arena entrance without some extra flair, so a matching vinyl jacket is included too. Get an extra costume set, and you can team up with your best bud to reform The Hart Foundation. Or have him dress as an opponent and hope he lets you practice your sharpshooter on him! Remember to pick up our WWE Championship belt to complete the ensemble too. We're sure you'll be capable of winning it yourself with a look this cool, but might as well bring some extra bling to the ring while you're on way to winning your next title!