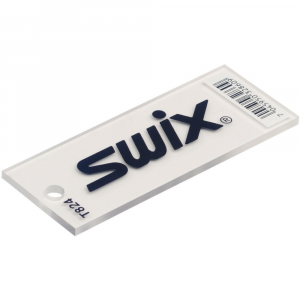 Swix Plexi Scraper for cleaning and wax preparation of skis and snowboards. Great tool for scraping off old wax, and clean the base before adding new wax. Basically iron in whatever wax you want to use and let cool. After the skis or snowboard has cooled then use the scraper to remove any extra wax. The surface should be smooth(and there are many tools to help in the process but the scraper is the main tool) A little about Swix is that they began as a modest line of 5 ski waxes has grown into a world-leading brand name for winter products. The goal is still the same, however... to bring enjoyment to recreational skiing and snowboarding and success to racing through quality and performance. Swix is the leader in waxing and tools! Features: Plexiglass scraper Built and designed to protect the base of the ski or snowboard during scraping