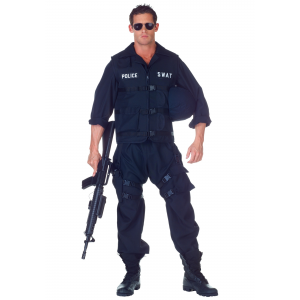 SWAT's the Deal with SWAT? Let us tell you. When you're a member of the SWAT team you have to do a lot of grueling training. You must be in peak physical condition, and learn how to responsibly use weapons, and batons, and did you know they have to work nights almost every day of the week? Being a SWAT guy isn't all negotiations and Hollywood inspiration, it's a ton of work! And if it's one thing that doesn't go with partying it's a lot of work. That's why this SWAT jumpsuit is the perfect thing to wear to your party. You'll look like you're really serious about getting down to party-making business, while also keeping the peace. That guy who always puts the lampshade on his head (we all know that guy) will think twice when he sees you chilling next to the stereo keeping an eye on things. Product Details While we don't condone acting like you're a tough guy while wearing this costume, we can say you'll look like one for sure. It all starts with a black jumpsuit sporting an American flag and a zipper down the front. The SWAT vest has plastic fasteners and says SWAT on one side and Police on the other. More adjustable straps are included for your thighs. Time to talk about this incredible helmet. It's hard and covered in fabric to look even more legit. Police Party While there's nothing wrong with going solo at the yearly headquarters Halloween party, but if there's one costume that makes a solid group look it's a SWAT costume. So, get your besties together and hit up the best party on the block in peace-keepin' style.