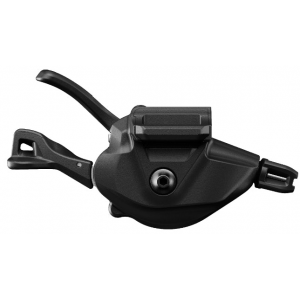 SHIMANO XTR SL-M9100 I-SPEC EV SHIFTERShimano's XTR level components have been some of the top-of-the-line mountain biking components for many years now. So it's no surprise to us that it continues to be one of the best components in the mountain biking world. The Shimano XTR SL-M9100 I-Spec EV Shifters are the newest generation of XTR. It has the capability of running either 11 or 12-speed drivetrains with a switch that is located on the bottom side of the shifter. Both the left and right shifter feature 35% less shifting force and 20% quicker lever access timethan the previous generation. The left-side shifter is completely redesigned and now features one lever to actuate both the upshift and downshift. Simply press the lever in to shift into the large chainring, and then pull the lever back to shift down into the small chainring. The new I-Spec EV has a wider range of adjustment than the previous version I-Spec II. It is only compatible with the new XTR disc brakes. If you're looking for the ultimate in performance shifting, then you'll love the Shimano XTR SL-M9100 I-Spec EV Shifters.Features35% less shifting force than the previous generation XTR20% quicker lever access time than the previous generation XTRI-Spec EV features a wider range of adjustability11 and 12-speed compatible for ultimate versatilityThe left-side shifter has one lever to control the upshift and downshift | Shimano XTR SL-M9100 I-Spec Ev Shifter Front, Left, 2 Speed, I-Spec Ev