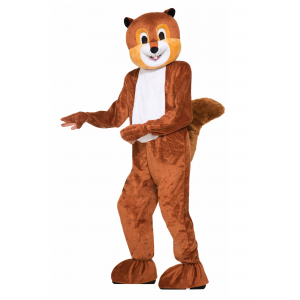 What kind of team has a squirrel for a mascot? A pretty darn cute one, we say! But you know, being a giant squirrel isn't all it's cracked up to be. Have you ever seen a basketball sized nut? They are really hard to come by these days! And you should see how viciously a human-sized squirrel will fight for one; that's probably how they became a team mascot, anyhow. Someone watched that process and thought "whoa, we should name a team after those terrifying little critters!" Fortunately with this Scamper the Squirrel Mascot Costume, you can cheer on your team without having to fight for survival. You can even get out of the woods entirely and go do human things--like grocery shop--so you have more reliable food sources! Plus, you'll be a big hit at the campus Halloween party. Who wouldn't want to dance with a furry, plush squirrel? Especially one named Scamper! The one piece jumpsuit is super soft and zips in back to enclose you in a cuddly cocoon of squirrely goodness. There is a large stuffed tail and a stuffed mask that encloses your entire head, ensuring that you look 100% squirrel-like. We would maybe recommend staying out of the forest when wearing this costume...you don't want to accidentally tread on some other giant squirrel's territory and find out precisely how not cute a squirrel can be!