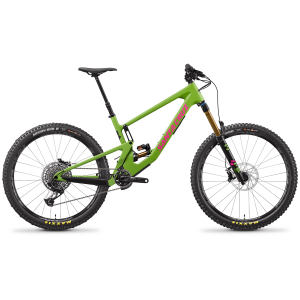 evo.com | Santa Cruz Bicycles Mountain > True to its past, the Santa Cruz Bicycles Nomad CC X01 Complete Mountain Bike sticks with 27.5" and long travel. One of the first "downhill bikes you can pedal anywhere", it's for riders who know that being overbiked only means you're going too slow. This build is as light as many smaller trail bikes, but can ram through bike parks as easily as it pedals over remote mountain passes. Twin seat stay risers make this new Nomad even stiffer, and proportional chainstays mean each size rides like the others. Take this one absolutely anywhere. SRAM X01 Eagle(TM) The X01 Eagle(TM) drivetrain signals an exciting new era of freedom and the next level of uncompromising performance for enduro racers and aggressive trail riders. Watching the world's best racers use their parts to battle against nature, physics and time itself, has inspired SRAM to supply them with the most advanced tools we can develop. X01 Eagle(TM) takes everything you love about SRAM's pioneering 1x drivetrains and increases its wear life, toughness, precision, smooth and silent operation. Add to that the 10- to 50-tooth, 12-speed, Eagle(TM) cassette, and you have a range of gears that gives you the freedom to enjoy the benefit of 1x in any terrain, any location and at any speed. X01 Eagle(TM) is drivetrain freedom-how you exploit it is up to you. Carbon CC Frame Santa Cruz's highest grade CC-level carbon frame is every bit as stiff and strong as their C-level frame, but weighs about 280 grams less, due to the use of lighter, stronger, and more expensive carbon fiber. Santa Cruz is also able to truly integrate the shock mounts, pivot mounts, dropouts and disc brake tabs into the structure, using all uni-directional carbon plies. The shock mount isn't merely riveted or bonded on after curing, but is an integrated part of the fiber lay-up. This makes Santa Cruz's carbon frames incredibly strong and able to absorb impact better than any other frame they've tested. SRAM Code RSC Brakeset Code dominates the World Cup - and every downhill trail worth its salt. In the gravity world, this is the pinnacle of performance, power and control. SRAM's famous big brakes have 4-piston calipers, a large reservoir, and fistfuls of power. Maxxis Assegai Front Tire With tall knobs that punch through dust and loam to find traction, this tire offers support and confidence on wet roots and rocks. While other tires excel only in certain conditions, the new Maxxis Assegai is built to go fast everywhere. RockShox Reverb Stealth Dropper Seatpost Don't let its familiar good looks fool you-Reverb is a whole new weapon. Its internals have been completely re-engineered to improve on its already legendary performance and to offer enhanced reliability: all the smallest details, down to the single seal, have been re-evaluated and updated to pass the hardest and longest durability tests. Additional bushing overlap also improves performance over time. This is the brand-new Reverb, engineered for the next-generation mountain biker. | Santa Cruz Bicycles Nomad CC X01 Complete Mountain Bike 2022 - Large