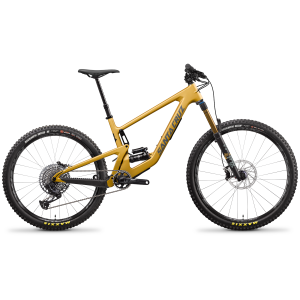 evo.com | Santa Cruz Bicycles Mountain > The first Bronson was successful in its intent: to bridge the gap between trail and all-mountain bikes, to boost the fun factor on every ride - no matter what the terrain. A perennial best-seller for Santa Cruz, they kept it 27.5" and they kept it a ripper. For the Santa Cruz Bicycles Bronson CC X01 Complete Mountain Bike, they've gone mullet-style and it's only made the bike even better. The funbike flickability is still here, but now you can hit everything going just a bit faster. This build features the best suspension components from Fox and SRAM, along with SRAM's amazing carbon X01 group. The Bronson's grown a mullet, and it parties even harder! RockShox Reverb Stealth Dropper Post Redesigned internals provide effortless actuation and increased reliability featuring new Vent Valve Technology(TM). With reduced overall post lengths and new travel options, riders of all shapes and sizes benefit from more travel than ever before. The new Reverb Stealth redefines what it means to simply go up and down. SRAM Code RSC Brakeset Code dominates the World Cup - and every downhill trail worth its salt. In the gravity world, this is the pinnacle of performance, power and control. SRAM's famous big brakes have 4-piston calipers, a large reservoir, and fistfuls of power. SRAM X01 Eagle(TM) The X01 Eagle(TM) drivetrain signals an exciting new era of freedom and the next level of uncompromising performance for enduro racers and aggressive trail riders. Watching the world's best racers use their parts to battle against nature, physics and time itself, has inspired SRAM to supply them with the most advanced tools we can develop. X01 Eagle(TM) takes everything you love about SRAM's pioneering 1x drivetrains and increases its wear life, toughness, precision, smooth and silent operation. Add to that the 10- to 50-tooth, 12-speed, Eagle(TM) cassette, and you have a range of gears that gives you the freedom to enjoy the benefit of 1x in any terrain, any location and at any speed. X01 Eagle(TM) is drivetrain freedom-how you exploit it is up to you. Carbon CC Frame Santa Cruz's highest level of carbon fiber frame construction, CC carbon is not only extremely lightweight and strong, but it comes with a lifetime warranty. The durability, feel, and performance of carbon is unmatched in the mountain bike world, and Santa Cruz are at the top of the game. Mixed Wheel Sizing (S-XL Sizes) The mixed "mullet" wheel sizing of top level racers has trickled down to the rest of us: with a 29" wheel up front for maximum grip and rollover clearance, you'll have a smoother and more solid stance through rough stuff and turns. The smaller 27.5" rear wheel helps you initiate those turns, while keeping the rear end maneuverable and out of your shorts. | Santa Cruz Bicycles Bronson CC X01 Complete Mountain Bike 2022 - S, MX