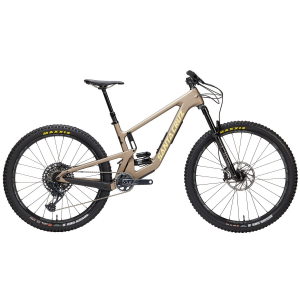 evo.com | Santa Cruz Bicycles Mountain > The Santa Cruz Bicycles 5010 CC X01 Complete Mountain Bike will deliver PRs as you journey to jib town. This bike pulls out all the stops in its search of fun, a trail tornado that never runs out of pop. Fill the in-frame storage, that Cavernous Glovebox(TM), with sour candy, and head off into the woods in a sprint. The AXS wireless drivetrain will keep up, zzt zzt zzt. The suspension is a perfect match for the frame's kinematics, giving you enough platform to boost everything you see, while taking the sting out of overshoots and ambitious line miscalculations (of which there will be many-such is the life of an amped-up frother). Take a deep breath and G-O go! Price and Spec Subject to Change Carbon CC Frame Santa Cruz's highest grade CC-level carbon frame is every bit as stiff and strong as their C-level frame, but weighs about 280 grams less, due to the use of lighter, stronger, and more expensive carbon fiber. Santa Cruz is also able to truly integrate the shock mounts, pivot mounts, dropouts and disc brake tabs into the structure, using all uni-directional carbon plies. The shock mount isn't merely riveted or bonded on after curing, but is an integrated part of the fiber lay-up. This makes Santa Cruz's carbon frames incredibly strong and able to absorb impact better than any other frame they've tested. Maxxis Minion DHR II A real rider's tire choice, these Minions bring a mix of rolling resistance, wear, and performance that can't be beat. With MaxxGrip up front and MaxxTerra compound on the rear and durable EXO sidewalls, this is a no-compromise rubber setup SRAM X01 AXS X01 Eagle is the wireless drivetrain for riders and racers who push for the purpose of gaining elevation. Whether having fun, progressing skills, or taking the win-X01 Eagle is designed and refined to support riders with the power of expanded capability. The future of drivetrains is here. SRAM G2 RSC G2 RSC is the half-ton pickup truck of the mountain bike brake world - dependable, go anywhere, do anything, plenty of power when you need it, and all of the features you need. The new G2 RSC is based on the SRAM Code design, so it puts Code-like power and modulation into a mini-Code package. And of course the signature Guide lever-feel and contact-point adjustability ensures that this brake works great for every rider. The G2 RSC presents rider-controlled offering with an alloy blade, lever pivot bushings, stainless steel hardware. | Santa Cruz Bicycles 5010 CC X01 Complete Mountain Bike 2023 - Medium