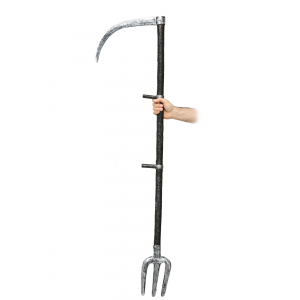 Agriculture is kind of scary. Have you ever taken a look at some of tools they had to use just to farm crops? They look like tools of death out of a nightmare. Even the Grim Reaper took up the scythe as his go-to weapon to carry around. And what about the pitchfork. It looks like something a giant would use to eat a human for lunch! Yes, despite being useful tools in human history, they're kind of creepy. And we decided to combine the two into one crazy accessory. What the heck? Why not, right?This Pitchfork and Scythe combo brings you the best of both worlds. It has a pokey side and a slicy side. Of course, this thing is made out of molded plastic, so it won't actually slice up anything and the pitchfork side won't stab anything, but it will mildly annoy anyone you poke with it. If you're planning to head out dressed as Death, you'll probably want this item. If you plan on dressing up as a serf from medieval times, you'll also want this item. Heck, if you just like creepy looking weapons, you'll probably want this thing too!