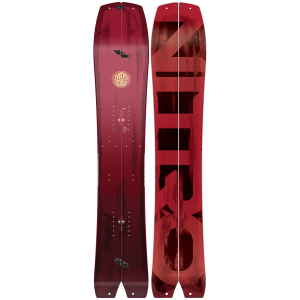 evo.com | Nitro Splitboards > There's no way around it, the Nitro Squash Splitboard is the most fun you can have in the backcountry. This board loves speed, and turning, and turning at speed - so much, in fact, that it's impossible to just putter around on. The Squash is a motivational speaker, a hype man, a wild scream into the night. It's equipped with straight up camber, a stiffer directional flex, and that mellow swallowtail - all designed to increase velocity in every snow condition. But there's something else, a distinct set of characteristics this board has that just makes it rip. Snow-sliding charisma, maybe, something hard to define but undeniable in effect. This one is so good it'll have you hooting and hollering up the skin track. Directional All Terrain Flex Nitro's most versatile flex pattern, combining their signature all mountain pop with smooth response, allowing you to tear up the entire mountain. Powerlite Core The highest grade of ultra-lightweight poplar wood in Nitro's Powerlite Core makes for the perfect ride with lots of pop and unmatched strength at a minimum weight. Sintered Speed Formula HD Base Nitro utilizes a new base material compound to achieve higher abrasion resistance, increased wax absorption, and higher on-snow speeds. Tapered Swallowtail Tr | Nitro Squash Splitboard 2022 - 163