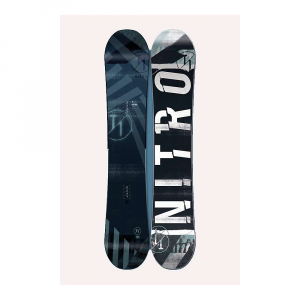 The Nitro Men's T1 Wide SnowBoard is a Freestyle Board with a wide, Twin shape for added stability during park riding. Its Cam-Out Camber gives early lift at the tip and tail for energetic response and stability, while the Whiplash Core Profile makes for a thinner construction between bindings and wider construction at the tip and tail for security during tricks. Its sintered base means that you get the most amount of speed out of the Board, while the Railkiller Edge keeps you secure with its thicker and stronger edges for added durability. Overall, this Board is a medium stiffer Board that emphasizes Performance, stability and the freedom to be confident throwing any trick. Features of the Nitro Men's T1 Wide SnowBoard Power Core II: Enhanced Performance and Extra Strength - The Power Core II is a tip-to-tail poplar Wood core with additional beech Wood stringers for unrivalled strength, smooth response and insane snap. Whiplash Core Profile: Maximum Ollie Power - This profile Features reduced thickness between the inserts with added meat outside feet for maximum ollie power, while maintaining a perfect press flex. Bi-Lite Laminates: Forgiving and Strong - Nitro's rider-trusted Bi-Lite Laminates Are engineered for unrivalled strength, powerful style and refined Board-feel. Rail Killer Edge - With unique edge profile and an impact resistance of more than 200% compAred to a standard edge the Rail Killer Edge is twice as thick and twice as strong. This proprietary construction can take on any rail challenge. Take a file to them or ride them hard and wear them down naturally, this chunk of steel has enough meat for years of abuse. Sintered Speed Formula Base: High Density / Hi Durability - Utilizing a new base material compound, Nitro has been able to achieve Higher abrasion resistance, increased wax absorption and Higher on-Snow speeds.