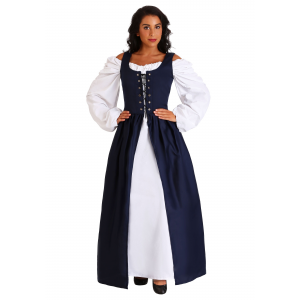 When we say "Renaissance" we bet your mind goes right to Italy. The Renaissance and Florence go together like Da Vinci and the Mona Lisa. But the "rebirth" actually took place all over Europe, and Ireland was no different! People still had to pluck the chickens, collect the eggs, churn the butter, and fetch pails of water from the well, they just also starting learning more about literature, art, and astronomy. (Interestingly, there also occurred a later historical "Irish Literary Renaissance" at the end of the nineteenth century, but that was mostly centered around William Butler Yeats and we're here to talk about dresses, so we won't go into that). Anyway, women in the Renaissance had to help out around the farm, but they also began to want to look fabulous while doing so. They often wore dresses while they completed their tasks. At long lass, now you, too, can be something of a Real Housewife of the Renaissance Times when you wear this Navy Irish Renaissance Dress. The navy sleeveless dress laces up the bodice to create that period style you adore, and the dress even has built in boning to ensure you really feel like you've traveled back in time. This costume will work just as well for a Renaissance Festival as it will for Halloween, but the chemise (sold separately) makes the costume cute and stylish, so make sure you pick one up at the local tailor before you go to visit the cobbler for the perfect pair of shoes to complete this costume.