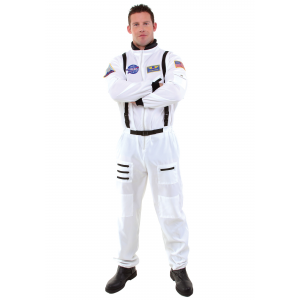 As a kid, what did you secretly want to be when you grew up? A doctor? A pirate? A new age punk rock/jazz fusion superstar? We know at one point or another, you thought to yourself that you wanted to be an astronaut, and we know that because every kid goes through an astronaut phase! Well, we can't exactly hook you up with a new career at NASA, but we can help you look like we did, with this stellar White Astronaut Costume! Once you zip up this meticulously detailed jumpsuit, you'll remember watching footage on TV when you were a kid of those dashing and brave folks floating around up in orbit, just doing their jobs like they worked in an office (and had one heck of a commute) and thinking to yourself that you could totally do that, too! But you know what you find out when you get older? It's cold up there, and all the food is either freeze-dried or mushy glop. And, if you get motion sickness in your helmet while on a spacewalk, there's only one place to throw up, and buddy, it ain't in a barf bag... But this out-of-the-world costume lets you feel like an intrepid space cowboy without any of that bad stuff! Made of 100% synthetic material, this uniform has plenty of pockets for storing your space gear, and features realistic embroidered patches for a more authentic look. Add an astronaut helmet (unless you think you might barf in it...) and get ready for blast off. Your inner child has waited long enough!