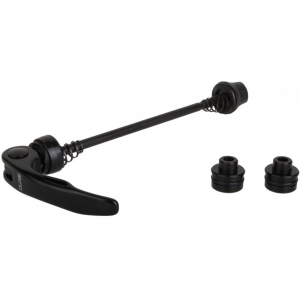 Mavic Crossone 15mm to 9mm Open QR Adapter A quick and dependable way to convert 15mm to QR Axles Whether you're swapping wheels or forks between bikes, this Mavic adapter offers optimal versatility. This simple kit lets you convert your 15mm thru axle to a quick release in no time. Running your Enduro front wheel on your XC bike? No problem. Putting your trail fork on freeride bike? You got it. Whether it's a permanent conversion or a quick fix, the Mavic Crossone adapter gives you ample options. Features Includes two 15mm to 9mm end caps, and a QR skewer Compatible only with Mavic 15mm hubs | Mavic Crossone 15mm to Open QR Adapter Black/Silv, from 15mm to Open QR