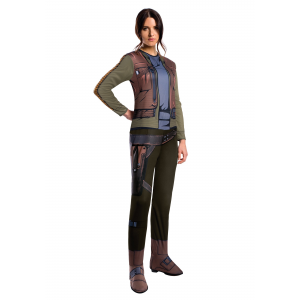 The galaxy far, far away is full of all kinds of heroes. Some jump around with lightsabers in their hands. Others have big furry sidekicks from Kashyyyk. Others are tiny little green aliens that live in the middle of a swamp in Dagobah. And yet, others, are just normal girls who decided to take the fight straight to the bad guys like Jyn Erso. She's the shoot first kind of girl who's heading on the Rebel mission to steal the Death Star plans and although she may not have a fancy blue lightsaber like Luke Skywalker or Rey, but she has more than enough cunning to make up for it! She won't even let a little thing like a Sith Lord get in her way.How about you? Are you a street-smart girl with a rebellious streak? Do you like to steal secret plans like a boss? Do you shoot first and have a desire to kick some serious Stormtrooper butt? Well then, maybe it's time you joined the Rebel Alliance as Jyn Erso and it just so happens that we have the perfect outfit for you.This officially licensed Star Wars costume comes from the 2016 Rogue One film. The costume comes with a polyester jumpsuit with attached boot covers for a quick and easy way to transform into the character. The top portion has printed details that create the look of Jyn's jacket. A printed gun holster around the waist adds extra detail. And the best part about this costume? You don't have to dress like Yoda and live in a swamp to be a great hero of the galaxy.