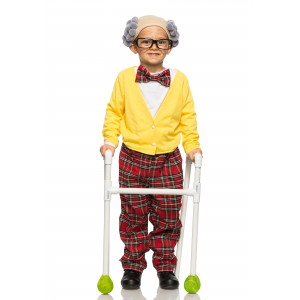 You knew he was different as soon as your son took a keen interest in shuffleboard. Ever since he was a toddler he lit up at the idea of pushing that weighted disc around. It wasn't until he dragged you to that meeting about Floridian retirement communities that you began getting concerned about his social life. After explaining to him that you can't retire until you've joined the workforce he transferred his interests to making sure kids stayed off your lawn which, strangely enough, didn't make him popular. On Saturday mornings your kiddo digs into a bowl of heart-healthy oatmeal and watches BBC documentaries on WW2, which is nice. There's no crazy Saturday afternoon sugar rush, you don't have to deal with him running around pretending to be the newest crime fighting guy in a cape. But it becomes challenging when he sits back at the dinner table and tells you not to complain, you don't know how bad they had it in the old days. And when you tell him to eat his peas all you get is, "Eh, what'd you say? Speak up!". You've pretty much given up and are feeding him his veggies mostly through Jell-O molds. You like your kid just the way he is but the life of an old soul can be isolating. Maybe it's time to dress him up as an old timer and drop him off at the senior center, where he can hang out with like-minded individuals. Those senior citizens are sure to take him under their wings once they see his charming plaid bowtie and pants. His balding head is sure to endear them as well. Anyway, if he's going to be a shuffleboard enthusiast he might as well learn from the best.