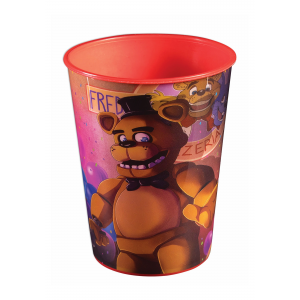 Not An Ordinary Cup What do you feel when you look at your drinking cup? Are you overwhelmed with a creeping sense of anxiety and terror? Or, are you mostly just... whelmed? It's not something that a lot of people put much thought into. Glasses are made for quenching your thirst, not for making you feel things, but maybe they should. Instead of just gulping down some of your favorite fruit punch in a plain old drinking glass, you could be using this Five Nights at Freddy's party cup, which dredges out those frightening memories you have of playing the video game. It's no ordinary cup, that's for sure! Product Details The cup is licensed from the video game franchise and showcases Freddy Fazbear himself on the side. It's made out of molded plastic and has a 16 oz. capacity. Fill it up with your favorite cold beverage and enjoy! Please do not place this bad boy in the dishwasher or the microwave. Those are both very bad ideas and you won't like the results. Fill it with Fruit Punch If you want a drinking glass that will help you feel the terror all over again, then you want this Five Nights at Freddy's party cup. It's way better than drinking your cold beverages (we suggest fruit punch) out of some boring, plain cup without Freddy on it!