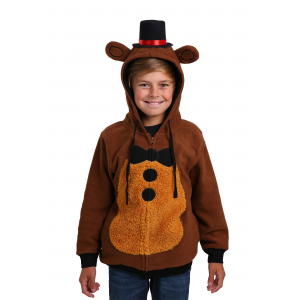 What is Freddy Fazbear's problem? All we wanted to do was hang out in his pizza place for a few nights as security, collect a paycheck and be on our merry way, but then he shows up, jumping out of the shadows, trying to scare the living daylights out of us. We couldn't even make it the full five night's, but maybe your kid is brave enough to do it. Maybe... your kid is even brave enough to become Freddy himself!Now, with this Five Nights at Freddy's costume hoodie, your child has the chance to become the most terrifying animatronic character since... well, ever! The hoodie is made of 100% soft polyester material and fits with a zipper in the front. The hood even has Freddy's signature top hat and bear ears on the top, so your child just has to flip up the hood to look just like the video game character.