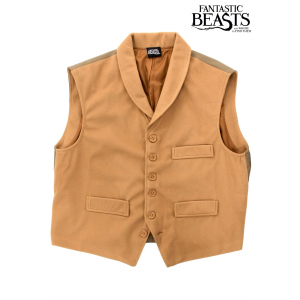 Newt Scamander certainly has his hands full. When there's a Niffler, a Bowtruckle, an Erumpent AND a Demiguise on the loose, you're not going to have a moment to lose before they start causing a ruckus. He might seem a bit absent minded, but Newt absolutely comes prepared... at least when it comes to his wardrobe! You see, he knows he's not going to have even one second to think about his clothes, which is why he makes sure to have his fancy vest at hand at all times! Now, you can be prepared just like him! This Newt Scamander vest comes officially licensed from the Harry Potter universe movie, Fantastic Beasts and Where to Find Them. It looks just like the one worn by Eddie Redmayne in the film and makes for an outstanding cosplay piece. Unfortunately, it doesn't help in the capture of loose creatures with magical abilities, so you're going to have to rely on your own wits for that sort of business!