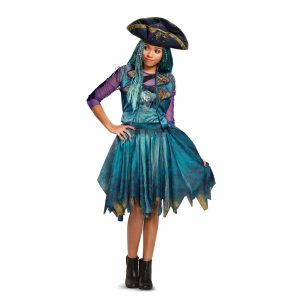 Queen of the Crow's Nest Uma might not be a symbol of good behavior. Well, what can we expect, she's a descendant of the Queen of the sea, Ursula. While Ursula might have a lot more responsibility than when she was manipulating two eels and a red-headed mermaid these days, her daughter is running wild with a cool crew. Uma's group of friends might stir up trouble on her island but the thing is, that's what citizens of Isle of the Lost respects! And while she might be more than a little jealous of her friends heading to Auradon High, we know she's having more fun helping her mom run the fish and chips shop and telling her crew what to do. Being a villain just isn't just as much fun when you have to behave like a royal! Product Details This costume has a look that screams Isle of the Lost. The top has an attached layered vest with a gold leaf lapel. The shoulders have colorful fringe are matched with sheer gauze sleeves and are accented with black sequins. The skirt is pleated in the front with blues and golds throughout the pleated fabric. Your child will feel like a boss once she's rocking the gold-trimmed tricorn hat. Want to complete the look? Top the whole thing off with Uma's trademark blue braids. What's My Name? When your child is transforming into the Disney Descendants character, Uma, you might notice a few changes. For instance, everything Uma does is always done with confidence. Secondly, she might turn into an octopus when she's angry. Or maybe not, this is still real life we suppose. If your child is ready to head out as one of the descendants of Disney villains this Halloween she can even pair up with Mal and Evie. Maybe she'll finally convince them that the villain life is where it's at!