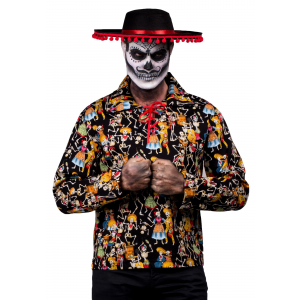 Yeah, yeah, yeah. We've all heard that dead men tell no tales, but what we want to know is... can a dead man can still party? We're in the party business, can you blame us? This is a matter of grave import for us. Does death stop the party, or can you continue the shindig once you've kicked the bucket? Popular culture and movies seem to indicate that there may just be something waiting for us once we enter the great beyond. Naturally, we here are hoping that "something" may just be a rollicking party. Of course, if that IS the case, one might be in desperate need a party ensemble. They also say "you can't take it with you," but...maybe there's an exception to be made for just one cool top, like this Dead Man's Party Shirt. This shirt hosts whole plethora of partying skeletons (further data proving that the dead can disco). Some of them are playing guitars and some of them are drinking beers and some are even shaking their groove thing like it's the greatest party of eternity! The lace up front lets you wear it tight or loose, depending on what style you like (and weather you put on a few pounds in the underworld) and it also makes for a great party shirt when you're still among the living. This is one shirt you should definitely be caught dead in!