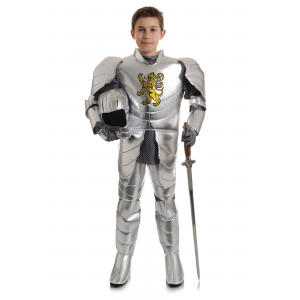 Your kid might not be the football quarterback type. He might be more of the 10th level paladin type who fights orcs in the park on Saturdays. Instead of trying to toss around the old pigskin with him, you may just want to get him this Child Knight Costume and take him LARPing. And hey, you know that this is something to be proud of! LARPers know more about history than any pigskin throwing child. It's nothing against the football players or anything but how much can you learn about the Medieval era when you're simply playing a game? Want your kid to be on the up and up when it comes to King Arthur and the Canterbury Tales? Your kid will really get into learning more about history when he puts on this ensemble. It's lightweight with a metallic finish on the foam pieces and a chainmail print on the inner layer. The chest piece is emblazoned with a golden Scottish lion. The costume also includes a soft helmet that fastens with a hook and eye touch strip. Finish off the look with one of our cool shields and swords to make this look complete. So, whether you're putting together this awesome costume for Halloween trick-or-treating, a school play, or LARPing, it'll be a costume that he'll want to break out again and again. In this shining armor, he can destroy villainous creatures, slay dragons and ultimately save the kingdom. It's about time this world produced a few more heroes. Doesn't that sound way more fun than tossing around a crummy old football?