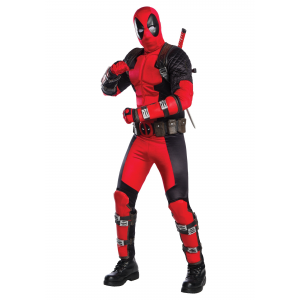 "Please don't make the super suit green... or animated!Don't worry, Wade, we got the memo. No green, no fake glowing muscles and no boring plot lines that involve a tentacle cloud-rock-monster thing that floats around through space. How about something with tons of red, so enemies can't see you bleeding, mixed in with a little black so people won't mistake you for Spider-Man? That's exactly how Deadpool likes it and that's exactly how this Deadpool costume does it. That's how you like it too, isn't it you cheeky little devil?Don't worry, we have your best style interests in mind! This Grand Heritage series isn't your granddad's superhero costume. Seriously, it's not your granddad's costume, so don't go calling your poor grandpa up on the phone to ask him about this Deadpool costume. He doesn't have it. We do, so if you want it, you got to talk to us. The high quality costume has more accessories and details than you can shake a stick at, although, why you'd shake a stick at a costume is beyond us. The red jumpsuit does a smashing job of capturing the Merc with a Mouth's deadly style. The included belts, gloves, pads and buckles are an awesome touch, completing the look. It will probably make you feel like mouthing off to Colossus or making jokes about Patrick Stewart (or John McAvoy, take your pick). The costume fits with a zipper in the back, so you may need to get a friend (preferably one named Weasel) to help you suit up for some deadly merc action.Once you're all suited up in it, you might be wondering to yourself, "What's the first thing I should do while dressed as Deadpool." That's easy. You go grocery shopping in it. You're going to need a lot of chimichangas if you plan on being Marvel's craziest comic character.