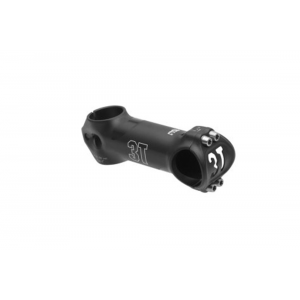 3T ARX II Team Stealth StemArx II is the latests in the revered Arx alloy stem series, which has been the centerpiece of many bikes since its inception in 2007. Its a subtle refresh of this classic design. The faceplate is drawn in tighter at top and bottom, for a more ovalized frontal appearance, while retaining the cutout 3T logo. The sides of the extension are subtly flattened for a more sculpted look by comparison with the tubular section of the first-generation Arx. Revisions also include a single M7 steer clamp bolt to replace the dual M5's in the original model. Bolts are now the more-secure Torx-type fitment in place of the Allen bolts used previously. This prevents stripping and increases torque precision. Arx II Stealth features our elegant Matte Black finish, making it the perfect addition to your cockpit.FeaturesWeight: 125gMaterial: 7075 T6 AluminumStack: 40mmAngle: 6deg | ARX II Team Stealth Stem Black, 130mm, 6 Degree