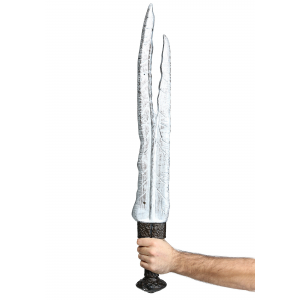 If you're clashing with the Titans, would you bring a little saber or a giant sword with you? Hmm, that's what we thought. Whatever job is at hand, you have to use the right tool to fulfill it. If you're using a Greek soldier's sword against a God, you might be fighting with a stapler. We wouldn't recommend it. Finding the right weapon to defeat a Titan is a major part of the challenge, along with brains and brawn of course. That's where we come in. You have options. This sword might look as if it's been through a lot, that's because it has. The Calibos sword belonged to a giant, angry demi-God who made a habit of going against Perseus. When he finally was defeated it wasn't because of his sword, he just couldn't defeat gravity when he was falling off that cliff. Whether you are fighting a God or a mortal, this monster of a sword gives you the upper hand.